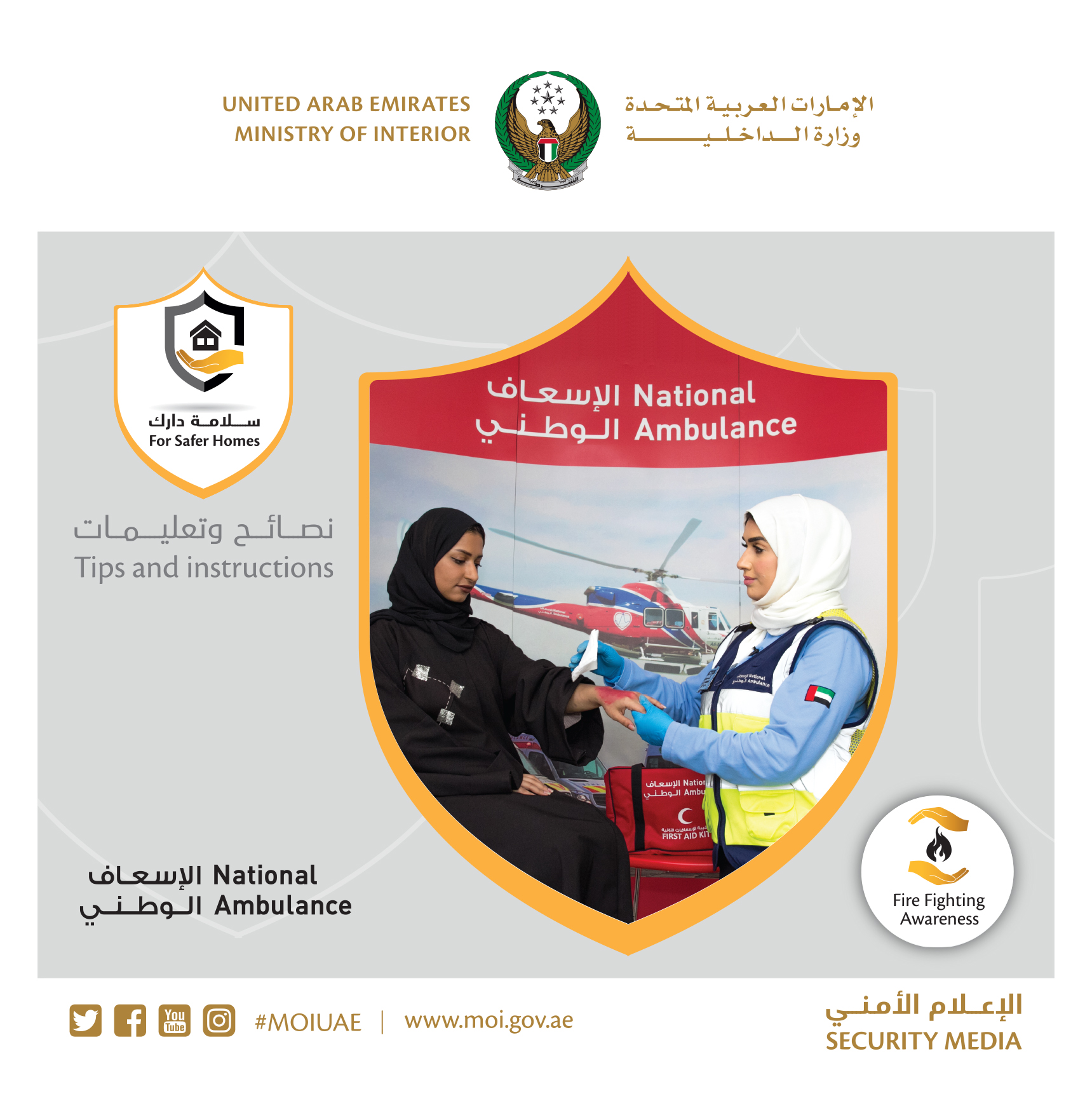 Abu Dhabi, April 7, 2019: National Ambulance, in collaboration with the Security Media Department at the Ministry of Interior, has produced a series of videos to raise public awareness about burn injuries and the correct first aid treatment for each type to help ensure members of the public are prepared in the case of a burn incident or an emergency fire situation. The videos are part of National Ambulance’s active participation in the ‘For Safer Homes’ campaign to reduce the negative impact of fire recently launched by the General Command of Civil Defense, which runs until the end of May.

The videos will form part of the coming broadcast message campaign posted across both the Ministry of Interior and National Ambulance’s social media platforms. They show National Ambulance emergency medical experts providing both information and first aid advice on the types of burn injuries caused by fire, such as burns caused by exposure to heat or inhalation of gases or toxic substances, as well as other domestic burns, such as electrical or chemical, and provide the first aid steps to treat them correctly.

Major General Jassem Mohammed Al Marzouqi, General Commander of Civil Defence at the Ministry of Interior, commented on National Ambulance’s participation as an important initiative which comes as part of their continuous contribution and efforts in enhancing emergency response times, as well as the levels of prevention and mitigation of the negative effects of fire. He also pointed out the importance of the integrated efforts and high-level coordination between relevant parties in giving such campaigns the necessary momentum to achieve their goals.

Ahmed Saleh Al Hajeri, National Ambulance CEO, said that such campaigns to raise awareness and inform the community are a strategic priority for National Ambulance. “Our medical experts are providing people with the first aid information they need to act if and when fires break out to help mitigate the negative effects of such dangerous situations.”

“The campaign enhances the joint efforts of the concerned authorities in the emergency sector to enhance civil protection and spread a culture of safety and prevention in line with the best international standards.” Al Hajeri added.

In partnership with Civil Defense, National Ambulance will also be conducting educational workshops under a sub-campaign - ‘housewife awareness’ - in the Emirate of Sharjah. The objective of these workshops is to promote the concept of home safety amongst housewives and care-givers and raise awareness of the preventive measures that reduce the risk of domestic accidents related to fires with the aim of reducing or minimising the risk of injuries and saving maximum number of lives.  Participants will be equipped with information and first aid guidance to deal with such accidents and the proper steps to contact the emergency ambulance service.