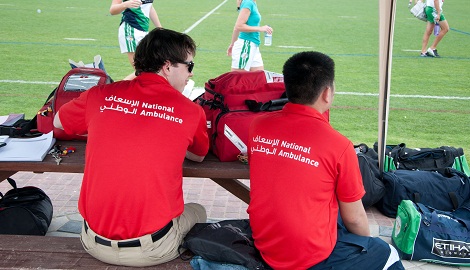 Abu Dhabi 29 April 2013: The International Gaelic Football Tournament that took place in Zayed Sports City on Friday, 19th of April, saw 20 teams competing with each other including an Emirati team.

Gaelic football may not be a violent game, but it’s not a tame one either. With five reported casualties, National Ambulance Director Operations Emergency Public Safety (EPS), Adam Crosby, said: “One of the casualties required patient transfer to the hospital, smoothly carried out by our emergency team while the four others were treated on scene”. However, with approximately 500 visitors to the venue, and with teams from Doha, the Gaelic Football Tournament was a tremendous success.