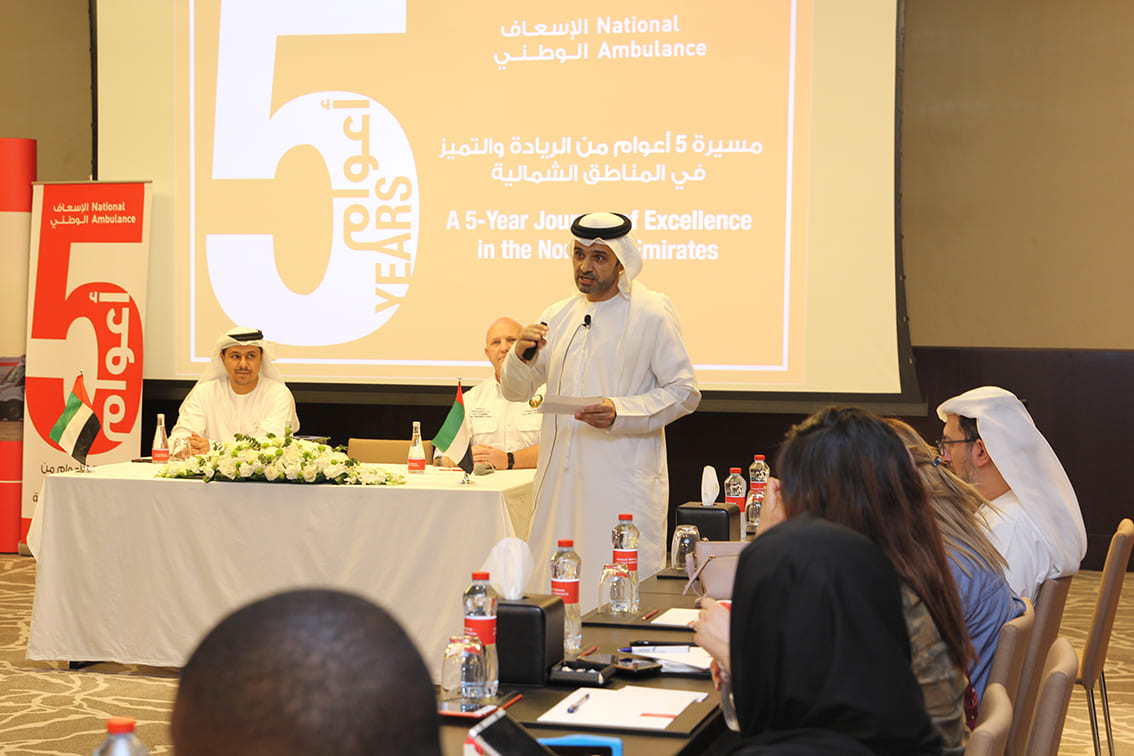 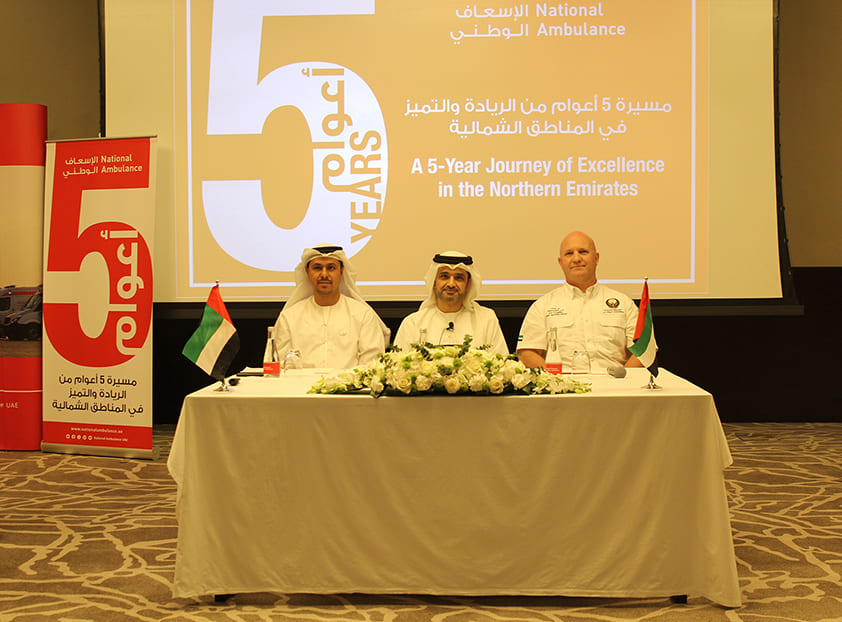 Abu Dhabi, 27 February 2019: Figures released by National Ambulance today, at a press conference held in Abu Dhabi, highlight the increased performance of the emergency ambulance service as it celebrates its fifth anniversary serving the community in the Northern Emirates. Since National Ambulance began operations in 2014and until the end of 2018, it has received over 290,000 calls, responded to over 200,000 incidents and treated more than 179,000 patients. In 2018, National Ambulance received 74,329 calls with an average rate of 200 calls a day. They also show that while call numbers and patients treated have risen considerably, response times have fallen by 48% from 18 minutes and 12 seconds in February 2014 when the service started to 8 minutes and 29 seconds in December 2018, which is equivalent to or higher than response rates of developed countries. National Ambulance also maintained an average response time of less than 9 minutes in the last three years.

Eng. Hussein Al Harthi, Chairman of National Ambulance, said: “We operate in accordance with the highest international standards and in collaboration with concerned partners and government entities to achieve the UAE's strategy to be at the leading edge of international competitiveness that enhances its position as a global leader and advances it as one of the best countries in the world.”

He added: “The statistical data showing the development and growth of National Ambulance across a five-year span confirms our commitment to excellence and motivates us to continue to improve and modernise our service provision to the community of the Northern Emirates. This will be achieved by continuous investment in our qualified staff and providing them with the necessary support and tools that enable them to perform proficiently and provide the highest quality of care.”

Ahmed Saleh Al-Hajeri, CEO of National Ambulance, highlighted that the statistical data indicated that the number of calls has increased dramatically since inception in 2014 recording a 150% increase over the five-year period. The data shows that the average monthly rate increased from 2,483 in 2014 to 6,194 in 2018. Al Hajeri also pointed out that the number of activated calls also increased by 89% where the average monthly rate of the calls that were responded towas4,476 per month in 2018 compared to 2,365 in 2014 with a parallel 62% rise in patients treated by National Ambulancefrom 2,228 in 2014 to3,617 in 2018.

As for the percentage of incidents related to road traffic accidents, Al Hajeri highlighted a decrease of 10% last year compared to 2014, and on average it is accounted for 24% of the total number of calls National Ambulance responded to in the last five years. He also pointed out that the decrease was due to the efforts exerted by the government Accelerators Team of the Ministry of Interior (MoI), which National Ambulance was part of, to reduce the fatality rate on five of the most dangerous roads in the UAE, in addition to the continuous efforts of partners within the emergency and crisis sector in theMoIunifiedpublicawareness campaigns to enhance road safety and save lives; and also comes in line with the recent announcement by the Traffic Federal Council of a 13.8% drop in road mortality rates in the UAE last year.

Commenting on the figures, Ahmed Saleh Al-Hajeri, CEO of National Ambulance said: “When we began operations in the Northern Emirates, we had a lot to prove. The figures we are publishing today highlight how far we have come in overcoming the challenges we faced in enhancing the quality of the service provided and winning the trust of the community as the provider of their emergency ambulance service. This success has been achieved by a lot of hard work and commitment from everyone involved.”

Al Hajeri added: “Our success over the past five years has been based on a strategy of delivering excellence, following best practice and continual improvement. By investing and improving performance in a variety of contributing factors, such as training and new technology, we have increased our overall results. Moving forward, we are looking to increase further the quality and efficiency of our service to maintain the trust we have established so far from the people of the Northern Emirates.

Al Hajeri also praised the dedication of the ambulance crews in providing the service as well as the concerted efforts of all the strategic partners in the Ministry of Interior, including Police and Civil Defense; the Ministries of Health, Infrastructure Development, Education and Economy; The General Command of the Armed Forces, the Department of Health and other stakeholders. He also commended the level of continuous support of the UAE leadership, especiallyH.H. Lt. GeneralSheikhSaifbin Zayed Al Nahyan, Deputy Prime Minister and Minister of the Interior, which contributed to strengthening the leading position of National Ambulance in the emergency ambulance sector in the UAE. Al Hajeri praised the partnership across the emergency services saying: “The partnership of the emergency services under the leadership of the Ministry of Interior, provides the people of the Northern Emirates with the knowledge that they will be best served in the most critical of situations.”

Al Hajeri also highlighted the significant investment National Ambulance has made in training for both its professionals and external community partners. In particular, he pointed to National Ambulance's focus onEmiratisationwhichresulted in the launch of an innovative programme to train and employ local people to serve as Emergency Medical Technicians (EMTs). Launched in partnership with the University of Sharjah, the first year of the EMTprogrammesaw 13 Emiratis graduate and take up permanent positions with National Ambulance in the Northern Emirates. This number doubled in the second year to 26 and plans for this year's intake is to double the number again. Al Hajeri added: “Our innovative Emirati EMTprogrammehas proven to be a great success and provided career opportunities for UAE nationals in the health sector, which is crucial to the goals of our Leadership. In line with the strategic objective for continual improvement, the EMTprogrammehas doubled in size every year and we intend to expand it every year moving forward.

In addition, investment in training and skills of National Ambulance medical professionals and in modern emergency equipment and the increased level of cooperation of bystanders in following the first aid instructions given by the staff at the Ambulance Communication Centre(ACC), have contributed toa 6.1%increase in the percentage of pre-hospital patients successfully having a return of spontaneous circulation (ROSC) on scene from 3.1to 9.2% over the past five-year period, compared to the global average range between 5 and 9%.

In 2018, National Ambulance facilitated more than 1,000 medical staff trainings, one of the highest standards of pre-hospital emergency medical care in the Middle East. National Ambulance has also collaborated with community partners and several government entities in the Northern Emirates to provide First Aid Training with more than 1,275 trained in First Aid to assist the community in emergency situations.

In line with the UAE Leadership's objective to utilise the latest technology, National Ambulancecontinues to invest in the technology and smart solutions that enhance its service provision and response times. The dispatch systems used by the ACC are continuously upgraded to enable them to deal with the increased number of calls received, while information resilience and safety have been improved by building a high availability IT environment through a state-of-art backup and replication solution, and by building a secondary datacentre. Also, the National Ambulance 998 App now allows people in the Northern Emirates to request an emergency ambulance using their mobile phone and taking advantage of the latest technology, such as GPS location, to respond to incidents.

In 2019, the National Ambulance Communication Centre (ACC) will be connected directly to the Ministry of interiors (MoI) Intelligent Command Control Center (ICC) to ensure a more integrated and timely response from partners across the emergency sector to critical incidents. ACC will be updated with the latest technology and an upgrade to the Computer-Aided Dispatch (CAD) system will enhance functionality, stability and response times by electronically integrating with other emergency service providers including Police and Civil Defense. An investment will also be made in smart connections to vehicles and other command centres to ensure efficient work across services and that ambulance resources are mobilised in the right place at the right time to assist patients.

National Ambulance has also focused on internal processes that have resulted in greater efficiencies and contributed to the overall improvement in performance. An enhanced Electronic Patient Care Records (EPCR) solution has improved patient care and services and patients' records are now shared with hospitals electronically (paperless), which provides both higher accuracy and helps protect the environment. Moving forward, National Ambulance will also work with hospitals in the Northern Emirates to move to a paperless patients' files handover.

National Ambulance serves the community of the Northern Emirates through a qualified team of 430 ambulance crews and 39 medical dispatchers; alongside administrative, technical and support staff through 50 ambulance points distributed across the Northern Emirates. It operates in accordance with the highest international standards and in collaboration with concerned partners and agencies in the health, emergency and crisis sectors.