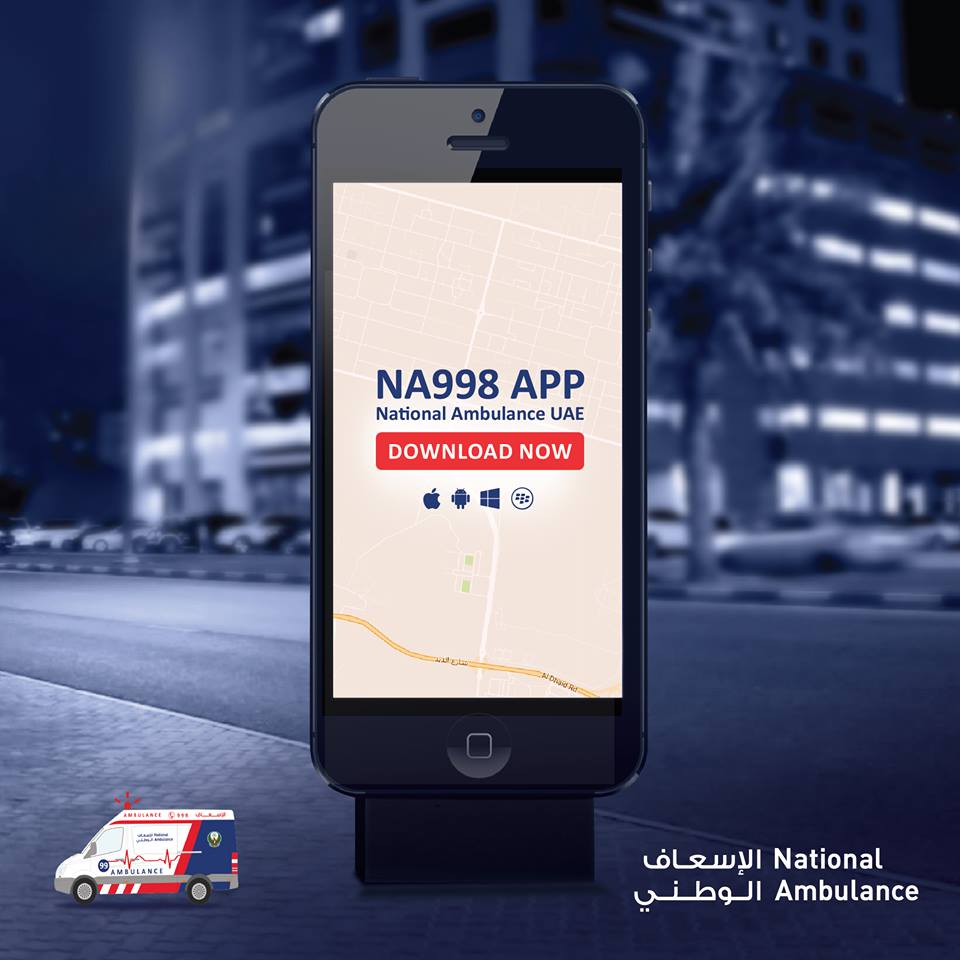 Abu Dhabi, 17 May 2016: Just a week after its launch, the National Ambulance 998 App was used for the first time in a successful response to an emergency medical situation in the Northern Emirates.  A passer-by to an accident in Sharjah used the app to inform National Ambulance, who immediately dispatched a crew to the scene using the GPS locator via the witness’s smart phone. The team treated a man with leg trauma at the site of the emergency before transporting him to Al Dhaid Hospital in Sharjah.

Commenting on the first successful use of the 998 App, Ahmed Saleh Al Hajeri, Deputy CEO of National Ambulance, said: “The benefits to the community of National Ambulance’s 998 App have been seen immediately. A conscientious citizen had the for-thought to have already downloaded the App and then use it correctly to inform us about an emergency. As a result, we were able to get to the scene in good time and treat the patient. This smart use of Smart technology has already had a positive impact, and is an important addition to the options available to support community safety.”

Abdullah Saeed Al Qaydi, the 30 year old Emirati man who was the first to use the App for an emergency incident said: “I found out about the App via social media platforms and I immediately thought it was an important resource to download. But I did not expect to be this useful so quickly. The day after I downloaded the App, I was passing by the scene of an accident and witnessed there were some causalities. I pressed the emergency ambulance request button on the App, which immediately identified my location, and in less than one minute, someone from the Ambulance Communication Centre got in touch to confirm the incident and my location in line with the geographical coordinates sent to them through the App. It is a very useful resource, especially for remote and rural areas where finding locations can sometimes be challenging.

The 998 App allows residents in the Northern Emirates to request an ambulance in an emergency. Ambulance can be dispatched immediately to their location through GPS tracking. The 998 App comes with a First Aid guide in Arabic and English. The guide contains easy to follow steps (which are highlighted with pictures) for users in how to respond to a variety of clinical situations.

Al Hajeri added: “I would urge all people in the Northern Emirates to download the 998 App. As this instance in Sharjah proves you never know when you might need it, but it is good to have it available when you do.”

By registering through the 998 App, residents in the Northern Emirates can request emergency ambulance at the touch of a button. The request goes immediately to National Ambulance’s Communications Centre, where highly trained staff are able to respond and dispatch an ambulance directly to the scene through GPS tracking.  The App is available for Android, IOS, Windows and Blackberry and downloaded via Apple App Store, Google Play and Windows store.