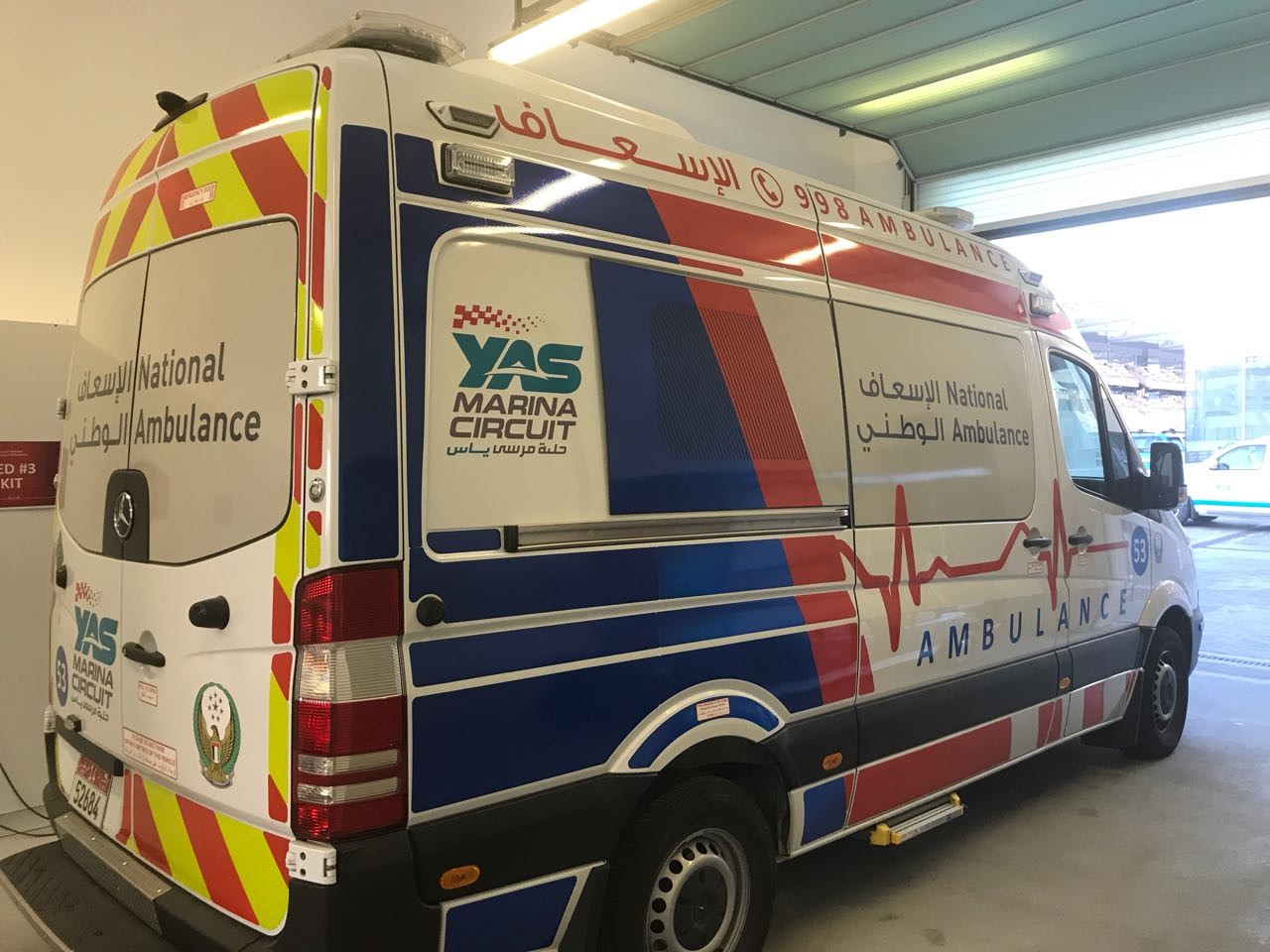 Abu Dhabi, 22 November 2017: National Ambulance will be covering this weekend’s Etihad Formula 1 Grand Prix event with a team of around 140 of its qualified and trained staff and 13 ambulances. The emergency medical provider will be responsible for the care of the drivers, support staff and spectators, as well as supporting the after-event concerts held at Du Arena on Yas Island following each day’s racing. It will be the fourth consecutive year that National Ambulance has provided emergency medical support at one of the largest world-renowned events of the year, which attracts tens of thousands of visitors from the UAE and all around the world.

National Ambulance, in coordination with Abu Dhabi Motorsport Management and the Automobile Touring Club United Arab Emirates, will be providing the lifesaving emergency support during the Formula One weekend. The emergency medical provider will be deploying a group of specialised rescue extrication trained staff to provide emergency intervention in the case of a crash; along with a team of doctors, paramedics to ensure drivers’ safety. The medical centre will have the ambulances and two helicopters on stand-by, along with a team of a specialised trauma surgeons, anesthesiologists and National Ambulance Critical Care Paramedics, EMTs and a pharmacist to ensure the proper care of the drivers and support staff.  The onsite team will be supported by the Abu Dhabi-based National Ambulance’s dedicated Ambulance Communications Centre and its logistics team.

National Ambulance Deputy CEO, Ahmed Saleh Al Hajeri, said: “The Abu Dhabi F1 Grand Prix has grown into one of the most anticipated and high-profile events in the region, attracting thousands of spectators from around the world. Now in our fourth year as the emergency medical provider, National Ambulance’s team of trained and experienced staff will once again be onsite to ensure the standard of health and safety matches the professionalism demanded of such a prestigious event. My message to all those attending is that National Ambulance is prepared and ready to act, so that everyone can enjoy the experience of this world-class event, both on the track and at the after-race concerts.”

National Ambulance will again be covering this year’s after-race concerts held at Du Arena. Its team of paramedics and EMTs along with the ambulances, an operational support unit and two first aid posts will be onsite at du Arena to ensure the care of concert-goers and performers.

Besides providing emergency medical cover for the 2017 Formula Abu Dhabi Grand Prix this weekend, National Ambulance operates an all-year-round emergency medical station at the Yas Marina Circuit site. The station supports the variety of activities that take place at the circuit throughout the year including entertainment, motorsport and regular community health and fitness initiatives that attract hundreds of thousands of visitors throughout the year.