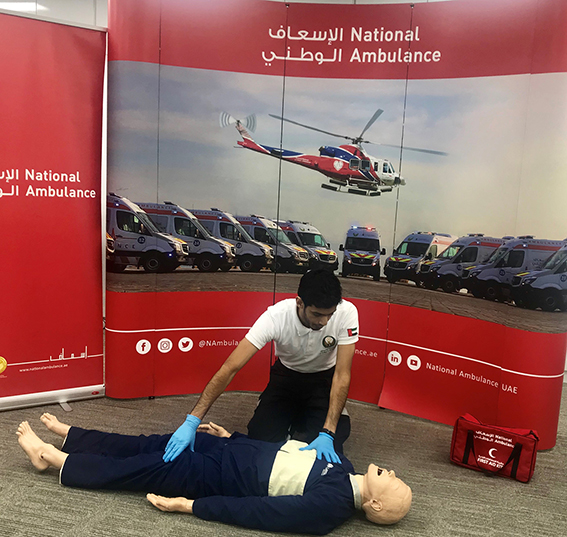 Abu Dhabi, 27 July 2019:  The Security Media Department at the Ministry of Interior (MoI) and National Ambulance, have produced a series of videos to raise public awareness about common summertime emergencies and injuries and the correct first aid treatment for each one to help ensure members of the public are prepared to identify and treat them. The initiative is part of National Ambulance’s participation in the ‘Summer Safety’ sub campaign of the wider ‘Your Protection is our Goal’ campaign, launched by the General Command of Civil Defense to promote public safety and the prevention culture to achieve the highest health and vocational safety at homes, workplaces and roads, which will run until the end of August.

The videos will form part of the coming broadcast message campaign posted across both the Ministry of Interior and National Ambulance’s social media platforms. They show National Ambulance emergency medical experts providing both information and first aid advice on the common emergencies people may face during the summer season, such as heat stroke, drowning, fractures resulting from water sports incidents, jelly fish and bee stings, and provide the first aid steps to treat them correctly.

Colonel Mohammad Abdullah Al Takkawi, Director of Media Affairs Department at the General Command of Civil Defense, highlighted the cooperation between partners in their efforts to provide a unified message in the vital area of public safety in line with the UAE’s objectives in making it one of the world’s leading countries in achieving safety and security. Such campaigns engage the community and raise knowledge levels in support of the efforts to keep everyone safe and secure.

Major Fawaz Ali Abdullah, Director of Security Media Department at the Ministry of Interior, said that the Department continues to strengthen its approach in communicating vital information to the public to enhance safety and civil protection, preserve lives and property. This involves using an integrated approach across all communication channels to support the achievement of the strategic objectives of the ministry, especially through the fields of community awareness and educational initiatives.

Ahmed Saleh Al Hajeri, National Ambulance CEO, said that the continuous participation with concerned authorities across the Ministry of Interior’s sector in community awareness campaigns comes within the efforts of  National Ambulance to enhance awareness in the community and instil a safety and prevention culture that understands the vital ambulance service and utilises first aid knowledge in saving the lives of others, which makes everyone partners in maintaining the safety and lives of citizens and residents of the UAE.

Al Hajeri called on members of the public to take preventive measures during high temperatures, such as avoiding direct sun exposure or outdoor activities during high temperature periods and exercising in the shade or indoors. He also pointed to the importance of applying sunscreen, wearing a hat, loose fitting, lightweight and light-coloured clothing, as well as drinking plenty of water and fluids to maintain the body's moisture and keep themselves hydrated to protect themselves against sunstroke and sun burns.

He also stressed the importance of following safety instructions and taking precautionary measures when going to beaches or swimming pools, and to pick spots that are safe, licensed and attended by lifeguards who are professionally trained to provide first aid in the instance of drowning. He also warned parents of the dangers of leaving their children unattended around beaches and pools.

In addition, he urged parents not to even leave their children unattended in vehicles, whether it was closed or in an operating position and not even for a short period of time, warning about the possible lack of oxygen and rise in temperatures, which could lead to serious injuries and even death.

Al Hajeri reminded the community of the importance of reaching out to National Ambulance in times of emergency by calling the 998 emergency ambulance number or using the NA 998 mobile App.