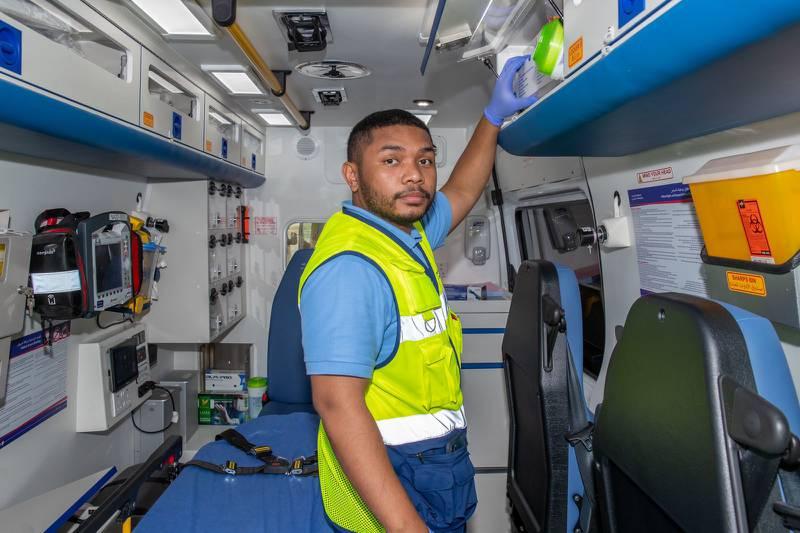 Ambulance officials have appealed to the public not to take up vital resources with inappropriate emergency calls — after revealing that a Sharjah resident recently called for help as his cat was about to give birth.

When staff at the National Ambulance communications centre took the frantic call from Indian man with limited English repeating the phrase “Tom and Jerry” followed by the word “baby”, they thought his wife was about to give birth.

Two ambulances and four emergency medics were sent, but it then emerged that it was the caller's cat that had gone into labour.

The incident shows how non-emergency calls are placing a strain on services and potentially putting lives at risk, said ambulance officials.

Pre-covid, the service took around 250-300 daily calls. That number has since climbed to an average of 600 and is likely to increase further at peak times.

Ramadan is usually a busy period.

“In general terms, the demand on health services has greatly increased as a result of the pandemic, and that is no different for National Ambulance,” said the emergency service's chief executive, Ahmed Al Hajeri.

“Analysis of calls since the pandemic established that a large percentage were related to non-emergency incidents or Covid-19 related queries.

“Our highly trained staff in the ambulance communications centre advise callers on how to deal with it [a medical situation] themselves or provide details on how to contact the right authorised sources.”

Other time-wasting call-outs recorded by the emergency service included people calling 998 to say they did not have a car or did not want to take a taxi to the hospital.

Callers also phoned in to report stray animals or unpaid salaries, while one call handler said someone had called 998 asking where to buy paracetamol tablets.

Of the 50-60 per cent of calls in which ambulances were dispatched, just 10-15 per cent were for critical patients in need of immediate care.

The remainder of call-outs were for moderate or minor patients who still required medical help, but were not in dire need.

A call volume that’s almost tripled in the past two years has led to an unparalleled increase in ambulance occupancy rates and stretched call handling capacity to unprecedented levels.

Mr Al Hajeri called on the public to think before calling for an ambulance, as taking up vital resources could put at risk the lives of those who may need more urgent care.

“National Ambulance is here to serve people who are at their most vulnerable,” he said.

“We are always prepared to treat life-threatening emergencies.

“Calling for an ambulance inappropriately may cause avoidable delays and have an impact on people who need timely, urgent life-saving treatment.

“Every moment counts in emergency situations. In minimising complications and risks that may threaten lives.

“My message to the public is to take a responsible role towards their community by helping us save more lives and not jeopardise this critical front-line emergency medical service,” Mr Al Hajeri said.

“I would urge them to think twice about calling for an ambulance if it is a non-emergency situation.

“They can call their general practitioner or visit the nearest medical facility.

“But if in doubt, and unsure if the situation qualifies as an emergency, they should not hesitate to call us as our staff are trained to help and will direct them to the appropriate resources.”

Illnesses that require the most urgent medical care are strokes and heart problems. Delays in receiving appropriate care can lead to long-term damage or death.

Signs of a heart attack can include severe chest pain and difficulty in breathing, while loss of vision, sudden numbness, weakness, slurred speech and confusion can signal a stroke.

That included the use of data analytics to help in decision making and performance management.

One emergency call taker, Reem, said handling pressure was part of the job, but non-emergency or hoax calls add additional strain on the service during a time we are dealing with the rising number of calls.

“It ties us up and potentially puts lives at risk,” she said.

“Many cases request an ambulance as a means of transportation to the hospital due to the lack of a car or unwillingness to request a taxi.

“Sometimes, people fear transmitting infection, although the case is not classified as an emergency.

“Others call [as they want] to enter the hospital early and not wait for a long time at the emergency entrance — despite the patient’s ability to walk.

“I would like those people to think how would they feel if they or their loved ones were seriously ill and the waiting time was increased due to a non-genuine reason,” Reem said.